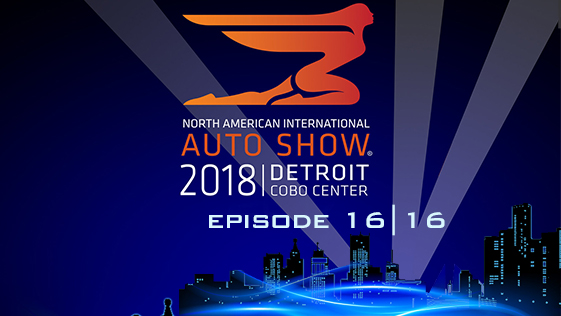 Wrapping up our visit to the 2018 NAIAS in Detroit we will take a quick look at new products from Hyundai, Kia and SubaruThe quirky Veloster from Hyundai has been freshened for 2018, with an evolved style that is a little more mainstream and a little more “grown up”.  In general we quite liked the new version, although the gaping mouth grille is rather too large for the car as a whole in our opinion.  The asymmetrical three-door format has been retained, but somehow the freshness of the original has been lost along the way.

Kia introduced a new version of its compact Forte sedan.  It is larger than its predecessor and consolidates Kia’s position in this part of the market.  The side view is rather generic, although the small 6th window adds an upscale feel.  The front, however, is quite aggressive for the segment and reinforces a sporty theme for the brand that was signaled by the introduction of the Stinger.  The large, black lower front air intake flanked by the combination fog light and brake duct make quite a statement for this segment.  At the rear, the black deck lid spoiler, the diffuser and the triangular reverse light/air exhausters continue the sporty emphasis.  The aluminum pedals and large left footrest continue the theme on the inside.

Last, but not least, Subaru introduced the Ascent SUV, a vehicle that was shown last year as a concept.  The Ascent is the largest vehicle ever offered by Subaru.  Although it is rather generic in terms of styling and has a “Ford-like” grille, we are sure that Subaru’s avid customer base will welcome its addition to the range.  Remember, Subaru sells almost twice as many vehicles as VW in the US market. 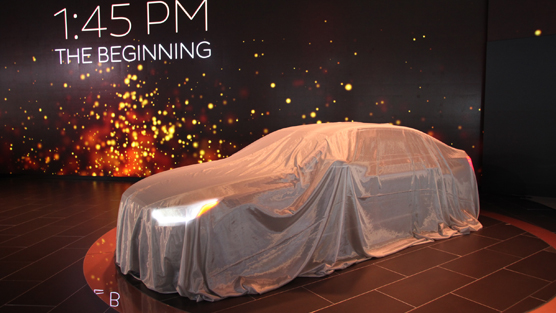 Volvo seems to be regaining its footing under Chinese ownership. The acclaimed XC90 SUV has helped drive US sales from 56,000 in 2014 to 70,000 in 2015, so the addition of the all-new S90 sedan should accelerate that volume growth.  The S90 shares a bold front-end theme with its SUV partner, featuring cool headlamps.  The car has a bold “substantial” look that reinforces the Volvo trademark emphasis on safety.  The interior is pleasing and the whole car seems to be well executed.  Whether they can really go it alone in this market and maintain a viable presence remains to be seen.

Kia unveiled the refreshed Forte and Forte5 sedans and hatchbacks.   The designs are competent, but not striking.

The big news on the stand was the Telluride concept.  It is a rather boxy SUV and yet another example of the pillar-less, suicide door fad.  The design was widely acclaimed, but frankly we are not sure why!  The front end is blunt and rather dated and the bodyside heavily sculptured.  The rear view is perhaps the best, clean and simple with sophisticated vertical taillamps accentuating the width.  The Telluride received quite a few votes for best concept at the show – but not from us – especially not in that shade of dark olive green!

Hyundai launched the newest luxury car brand “Genesis” at the show announcing the G90, a Mercedes S-Class sized rear wheel drive sedan, which is be followed by smaller G80 and G70 models and perhaps an SUV. The G90 looks like a serious contender in the class with a full complement of leather and wood on the inside and a dominating exterior.  The grille is a bit too much like an Audi in our opinion, but the strong crease lines on the body side and on the hood flowing up the A-Pillar provide some individual character.

To provide some additional excitement at the Genesis launch, the Vision G Concept was unveiled. This is yet another large two-door coupe, but it is certainly a beautiful car.  A strong bodyside crease flows all the way from the front grille to the tailamp.  A second feature line extends the belt line onto the hood, where it joins two more creases that are continued over the roof.  The rear surfaces are quite complex, but skillfully drawn.   One oddity is the door release handle that is on the quarter panel rather than the door itself.

The interior was luxurious as you might expect, although the instrument panel is rather simplistic. Overall we liked the car (in spite of the fact that several features seem to be “borrowed” from competitor designs) and it would make a great flagship for this new brand.  No doubt that the arrival of Luc Donckerwolke will make Genesis a successful brand.

VL Automotive was founded by Bob Lutz and Gilbert Villareal with a business plan to take incomplete Fisker Karmas (Fisker is now owned by Wanxiang) and replace the hybrid propulsion system with a conventional Corvette powertrain producing the Destino. Of the exterior body panels, only the doors are common with the original Karma.  The Destino is clearly better looking than the already striking Karma – both inside and out.  Even if VL runs out of Karma gliders, there appears to be a good opportunity in converting customer owned Karmas to Corvette power.

It was announced at the show that Henrik Fisker has now joined VL and the company has been renamed VLF Automotive to incorporate his initial. To signal Henrik’s involvement VLF revealed a stunning new design based on the Viper chassis and powertrain called the Force 1 V10.  This car (a prototype) which was built in about 6 weeks, is about 8 inches wider than a Viper.  It uses the Viper rear tyres on the front and even bigger rubber at the rear.  What’s not to like about this monster?  Well not much really, perhaps the funny “wing thing” at the trailing edge of the roof and perhaps the overly small and “squinty” headlamps, but overall we really hope that they are able to produce this baby for some lucky customers.

And so what seemed like a fairly ordinary show in the beginning actually had quite a few gems to keep us excited. The industry remains creative and vibrant, always bringing us back for more.  On to Geneva…………. 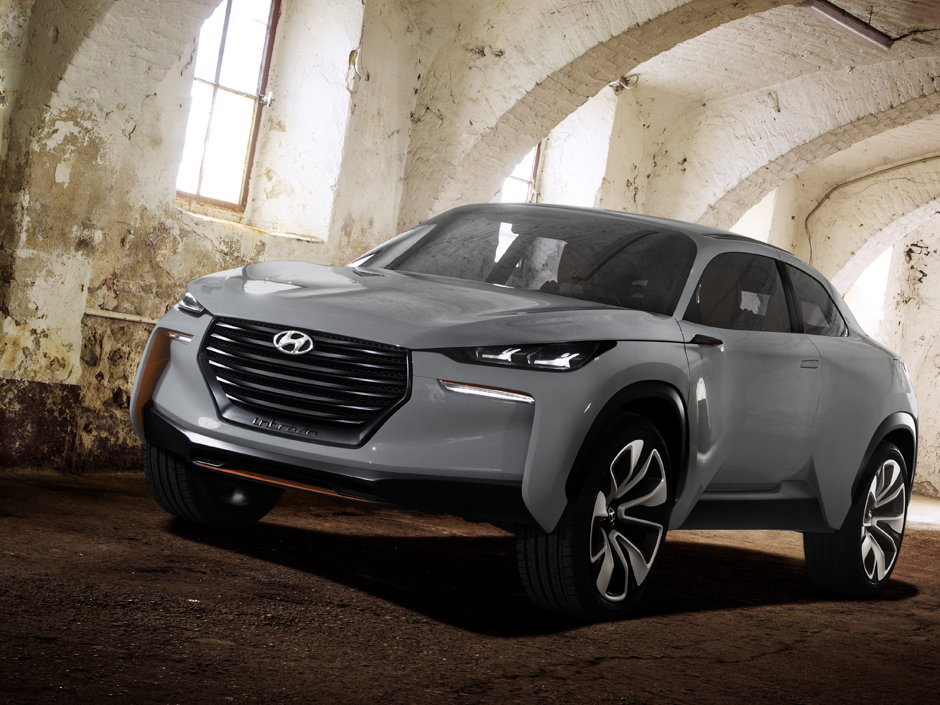 Hyundai has unveiled its new concept car, the Intrado, initiating a new design language called Fluidic Sculpture 2.0. It is the first Hyundai designed under the direction of Peter Schreyer (CDO&President of Hyundai Motor Group). The inspiration of the concept takes place in the aviation industry…and that is not a surprise knowing Raphael Bretecher (General Manager) who was in charge of the project. No doubt he has influenced the design team a lot. This cross-over concept is built around a super lightweight structure made of advance materials (see photo), and is powered by hydrogen.

The grill is very three-dimensional and wheel arches look like wings. It looks very impressive in the flesh. The doors open to reveal the absence of a B-Pillar and this gives a very interesting access to the interior.  The flashy orange on the inside is very aggressive and provides a strong counterpoint to the immaculate white of the outside. Seats are floating and even though there are four seats, the impression of space is clear. The central tunnel and its interesting details also remind us of that aviation feeling.

As Raphael Bretecher told us, the Intrado is inspired by the name of the airplane wing “intrados” producing lift to allow a plane to fly. The use of advanced materials is also a “clin d’oeil” (implied reference) to aeronautics. Listening to Peter Shreyer, the Intrado foreshadows the future of the automobile by combining the concepts of efficiency and freedom symbolized by the notion of flying. For him the power of mobility should deliver physical and emotional sensations. How can we disagree with that…? With this concept, Hyundai demonstrates that the future of car can be relevant and exciting… 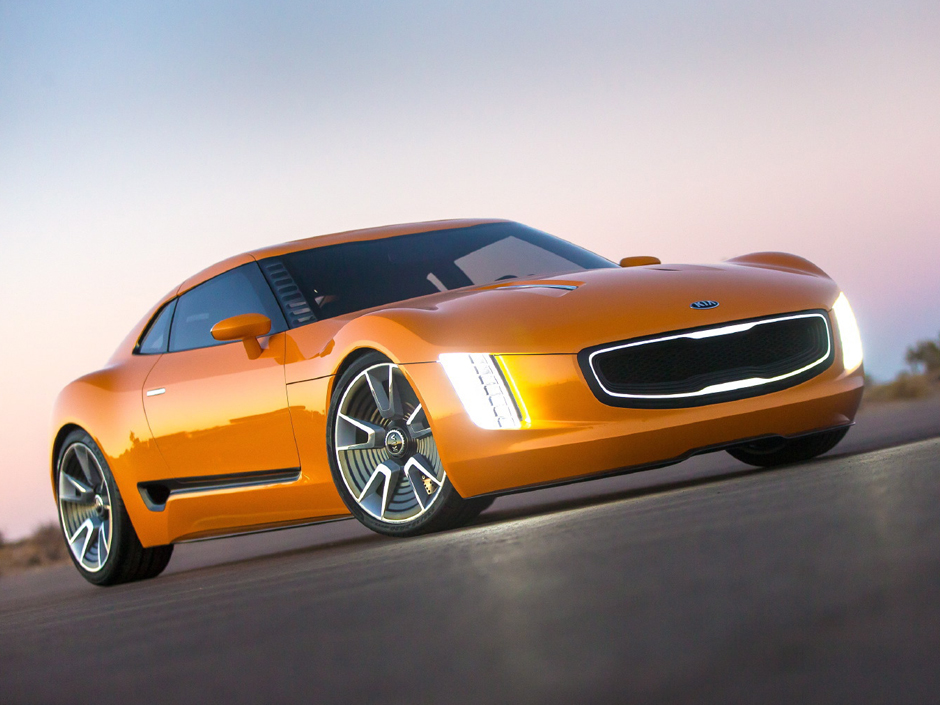 The Koreans have made great strides in the US market, steadily increasing market share and delivering excellent quality products.  Their two-pronged dual brand strategy seems to be working as they relentlessly move up market.  The Hyundai Equus and Kia K900 4 door luxury sedan models are priced in the $62,000 to $67,000 range.  This is pretty rarified air and it remains to be seen if this will be a step to far at this point in the brands’ development.

To add some excitement, Kia introduced the GT4 Stinger concept, a two-seat sport coupe with a somewhat retro look.  The forms were smooth and without a lot of the heavy sculpturing that we have seen on many other concepts.  Most striking is the front end.  The grill is bold and open, with a narrow bright surround featuring a subtle version of the Kia look.  More important, however, are the unique headlamps, cleverly styled into the leading edge of the front fenders.  The lights themselves are made up of 6 horizontal LEDs forming a rectangular block.  This breaks new ground and is like nothing we have seen before.

The bodyside has pronounced wheel arches, but remains simple and elegant.  The wheels were ‘different’, but not to our taste.  At the rear, the back window flows into the glossy black back panel which is contained on each side by bold ‘C’-shaped taillamps.  All in all it was a very attractive concept from Kia.  Let’s hope that they bring something like this into production. 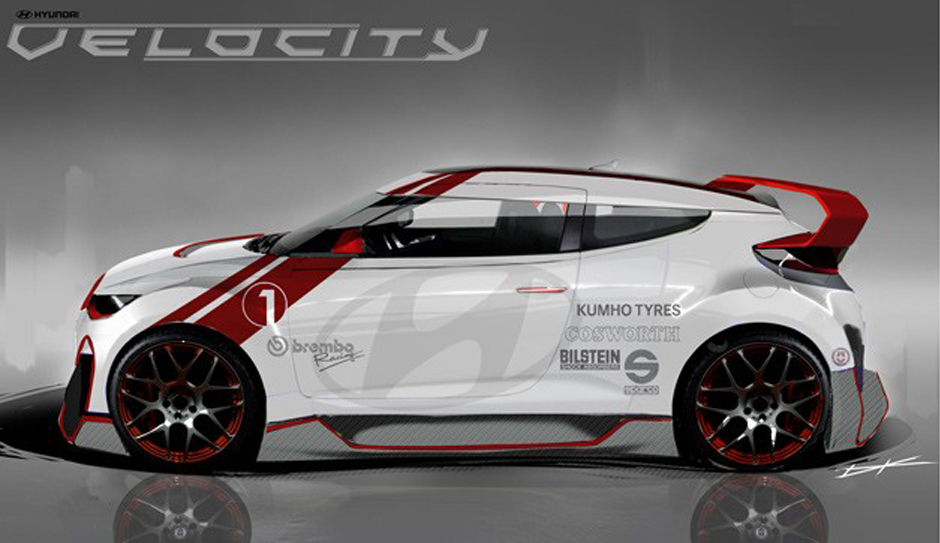 Hyundai has unveiled the Velocity at the Sema show 2012 this week in Las Vegas. Very impressive car designed by Daniel Kim. Andre Hudson (Photo) was one of the manager of the project.