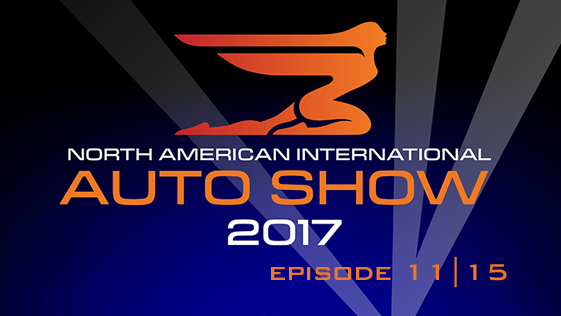 Nissan revealed the stunning Vmotion 2.0 large sports sedan concept. It is another one of our favourites from this show. The concept features what Nissan calls “Emotional Geometry” design language and defines the future styling direction for the brand. It is an evolution from the V-motion front-end design that we see on today’s cars. Predictably Nissan says that the concept incorporates “Intelligent Mobility Technology” – a must for every concept these days……

The sharp and aggressive surface language has crisp character lines throughout and the 3D shapes create a striking volume and architecture. The black roof that extends in a bold sweep from the middle of the hood (using black paint) to the deck lid is framed on either side by carbon ’pillars’ that incorporate silver threads adding a distinctive sparkle. This sparkle is repeated in carbon inserts on the wheels. The generous cabin with acres of wood is fully revealed by the ubiquitous show car trick of using ‘suicide’ rear doors and no B-Pillar. We like the bold shapes and design details, especially in the C-Pillar and tail lamp areas. Very nice.

Over on the Infinity display we saw the QX50 concept that is the product of ongoing collaboration with Daimler and shares underpinnings with the GLA and upcoming GLB. The concept reflects about 90% of the late 2017 production version that will be built in Mexico alongside its Mercedes stable mates.

The Infinity brand is all about driving and technology — or so we are told. The design language is “Powerful Elegance”. The proportions of the QX50 are driven by the front drive, transverse engine layout resulting in a short front overhang. To offset this factor the bold grille flows into prominent hood creases that sweep up and around the A-Pillar and into the belt line and all the way to the rear lamps. A lower A-Line crease flows from the headlamps and fades towards the edge of the rear door where it is ‘replaced’ by a pronounced feature line that rises up and over the rear wheel. The lights are distinctive front and rear.

The interior breaks new ground for Infinity. Gone is the so-called “dual cocoon”, which has been replaced by more driver orientation and a roomier feeling passenger side. “Dot” quilting was new and interesting on the seats and doors, with sweeping accent trim and multiple colour materials and leathers adding to the ambiance.