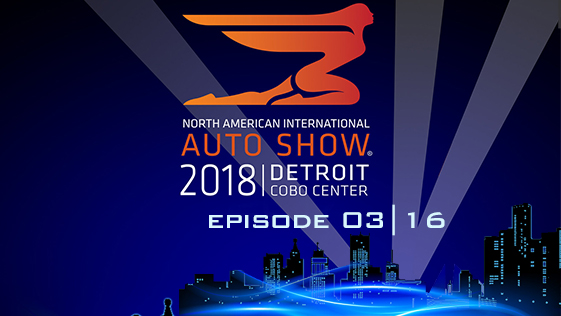 Ford created a lot of “buzz” surrounding the Mustang before the show with rumours of a Bullitt version of the 2019 car to commemorate the 50th anniversary of Steve McQueen’s famous film of the same name.  Not only did they display the new version of the current car, but it also shared the stand with the actual, un-restored car used in the movie and driven by McQueen.  A great marketing coup by Ford and a cool addition to the Mustang range.

Reintroduction of the Ranger mid-size pick-up to compete with the Chevy/GMC Colorado and Canyon was important news at the show.  The Ranger will be available in XL, Lariat and FX4 Off Road trim levels.  The FX4 displayed on the stand in an ugly gold/tan colour frankly looked a bit dull and the large, black plastic grille gave us a feeling of low cost.  Photos we have seen of the XL and Lariat are more appealing and project greater value.  Power is provided by a 2.3L EcoBoost 4 cylinder with direct injection mated with a 10-speed transmission.  It will be interesting to see how these mid-size trucks impact sales of their larger and more profitable siblings.

Also new at the show was the Ecosport small SUV that will slot in under the Escape.  The styling has a family similarity with the Escape, but with softer lines and a more tightly packaged front end with greater plan view.  Notably it has a side-hinged tailgate that will almost certainly be controversial.  The release handle is cleverly disguised in the taillamp —  perhaps too cleverly.  Engines will be a 3 cylinder EcoBoost 1.0L or a naturally aspirated 4 cylinder 2.0L standard with AWD.

Also introduced at the show was a facelifted version of the Edge, featuring a new front end, liftgate and taillamps.  The new, wider grille is now separated from the headlamps.  More, high tech features have been integrated and a new, sporty ST model added to the range – for reasons best known to the Ford planners……….

New large SUV’s from Ford, the Lincoln Navigator and Ford Expedition, also were introduced at the show.  Their sheer size is impressive and the interiors are truly cavernous – especially with the second and third row seats folded down.