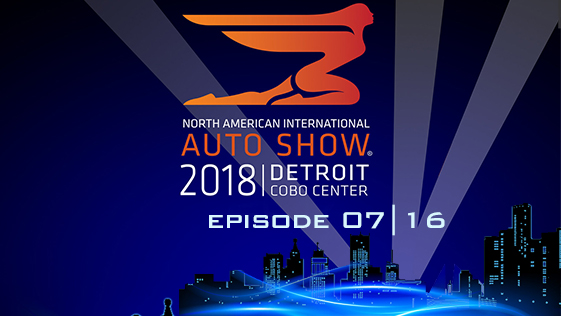 BMW revealed the new X2 SUV at the show.  It has a bold and menacing front end, a long roof accentuated by the large tailgate spoiler and a sleek, tightly wrapped tail.  The entry/egress is a bit tight, but the interior is pure BMW.  There was a blue X2 on display that had a bright orange/red interior  — probably not to everyone’s taste and not exactly understated elegance…….

The i8 Roadster had been revealed at the Los Angeles show, but it was a stunner in Detroit.  You have to give up the two rear seats to get the wind in your hair, but who cares.  It is such a cool looking car with a futuristic feel, yet has some retro style provided by the head fairings behind the seats.

The 7 Series is still a tour de force.  What’s not to like about a car you can get with a V12 under the hood.  Details abound; the beautiful exterior door handles; the complex seat details; the suede pillows on the rear headrests; controls and screens everywhere; there are even ashtrays in the rear, which seems odd in America these days.

The M3 CS now joins the M4 CS with the S55 3.0L twin turbo engine producing 453 hp and 443 lb ft of torque.  Aggressive styling elements are everywhere on the car and we like that.  The aero designed door mirrors are especially noteworthy.