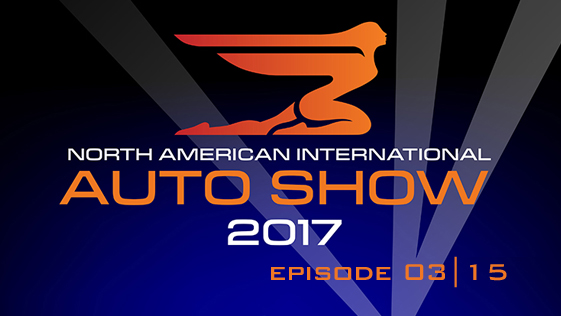 Ford presented some appearance updates on the F150 pickup after only a couple of years in the market.
At the front a new grille, bumper and headlights give the truck an even wider, bolder look, more like the well-received Super Duty version. At the rear new rear lamps are also aimed to provide a bolder look. On the mechanical side, a 3 Liter diesel engine will now be offered to fulfill a long-standing customer need. By the way, walking the stand I counted ten different grille designs for the Ford full-size pick up range. Now there is a design challenge!

Not much new on the car side of the business, although there was a production version of the beautiful Ford GT on display, alongside the actual Le Mans, class-winning racecar – dirt and battle scars still in place.


Lincoln unveiled a concept vehicle that is a precursor to the Navigator replacement scheduled to begin production in 2018. The aircraft inspired concept features one massive gull wing door on each side, along with three power-deployed steps for passenger entry. All a bit of overkill, but designed to provide full visibility of the crisp, clean and luxurious interior. The load compartment was largely occupied by a ridiculous clothing/travel case that fully blocked any rear visibility. Sometimes the designers get carried away…..

The exterior is bold, yet simple and elegant. The front end is massive and intimidating, featuring a really big version of the latest Lincoln grille. The wheels evoke an aircraft turbine. Those doors are truly massive and when open might well present a big problem in the average garage. Never the less, the design concept works well and we look forward to seeing the real thing. And yes, rumour has it that the body may be aluminium like its pick up cousin. 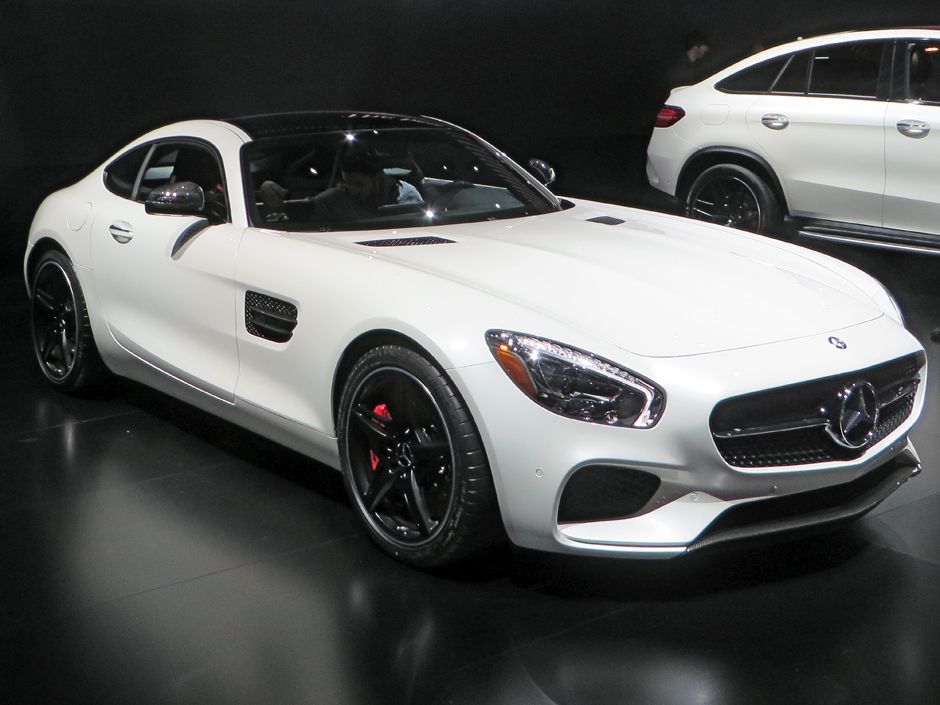 In this Episode 4, let’s talk about the German manufacturers and ask this question :

Why is it that the Germans (Audi excepted) seem to have forgotten that the definition of coupe or coupé is:

Mercedes call their new 4-door GLE ‘thing’ a coupe; BMW have 4 and 6 Series Gran Coupe 4-Door Sedans, as well as the X4 and X6 Sports Activity Coupe 4 doors; while VW has a new SUV called the Cross Coupé GTE!  What is this all about?  Mercedes just went through an elaborate retake on their nomenclature, but cannot tell the difference between a 2-door and a 4-door.  BMW’s Gran Coupe 4-doors are at least sleek looking, but what happened to the letter “d” on Grand – or is it Granny?  Well, I know…It certainly follow the Pininfarina concept Car called Gran Lusso…The Mercedes GLE and BMW X4/X6 are about as far removed from a coupe as one can get,  — except perhaps for the VW GTE!  To say that I am disappointed in these manufacturers would be a gross understatement.

Mercedes Benz had quite a few new products to show off.  The previously revealed AMG GT provided the main “eye-candy” in a bright pearl white paint job.  The car is striking from every angle and should become a force to be reckoned with the market.  Not nearly as attractive is the MB copycat version of the BMW X4/X6, the GLE.  There is no accounting for (bad) taste I suppose, but few market watchers would have predicted that the ugly duckling “Sports Activity Coupes” from BMW would achieve sufficient traction in their customer base to force MB to follow with a similar – also ugly — product.  I just can’t talk about these vehicles any more…….  Also on display was the Maybach version of the S-Class.  The interior is a bit overdone, with every conceivable feature and luxury detail, but it would be nice to stretch out in the back with a glass of wine while someone else drives you to the yacht.

The F015 autonomous vehicle concept attracted quite a bit of attention.  This beast is huge, with 26 inch wheels, four doors each of which has its own large screen TV, the rear doors are rear hinged and there is no B-Pillar, the front seats swivel 180 degrees, so you can have a meeting while being autonomously conveyed to your next destination.  What a total waste of time — and it is ugly too.  I typically like MB styling, but they seem to have lost their way with the F015 and the GLE.  I do still love the S-Class Coupe, however, and yes, it really is a coupe!

There was not much new on the BMW stand.  The i8 is still gorgeous, apart from the bright blue seat belts that is.  The interior of the i3 on display left me cold, however, Supposedly it is responsible, eco-friendly and in tune with the younger crowd, but the exposed, reconstituted trim boards on the IP and the doors left me crying for leather or vinyl.  The seats just left me crying.  But all is not lost, the 650i Gran Coupe is beautiful, even if they did get the name wrong.

Audi introduced the new Q7 to mixed reviews.  Somehow it is not as elegant as the previous model with sharper feature lines and a more station-wagon look.  The body is now graced with a “side spear” towards the bottom of the doors, presumably to disguise the element of slab-sidedness.  The grille on the Q7 (along with other models) is larger and more intimidating – good for autobahn driving.  Audi still maintains an envied position in the industry with respect to interiors and the Q7 is no exception.  To be the benchmark for as long as Audi has in this critical area is an astonishing achievement.

The VW display was brightly lit, as ever and prominently displayed were its Motor Trend Car of the Year and North American Car of the Year awards for the Golf range.  VW has struggled for share in the US market this year and continues to underperform. Missing from the VW product line up are the small and mid-sized SUV’s and CUV’s that are presently selling so well in the US.  As in previous years, VW again showed a concept for a potential competitor in this segment.  This year it was the Cross Coupé GTE.  You and I would probably call it an SUV.  Shown in a delicate shade of metallic blue, the GTE is a sharp and clean design with a solid “machined” look.  It features a low bodyside ‘A’ line that also embraces the unusually low door handles.  This low feature line, together with a broad spear on the lower edge of the doors, combine to improve the appearance of another slab-sided body.  All in all this is a competent design, they just can’t get it to the dealers soon enough. 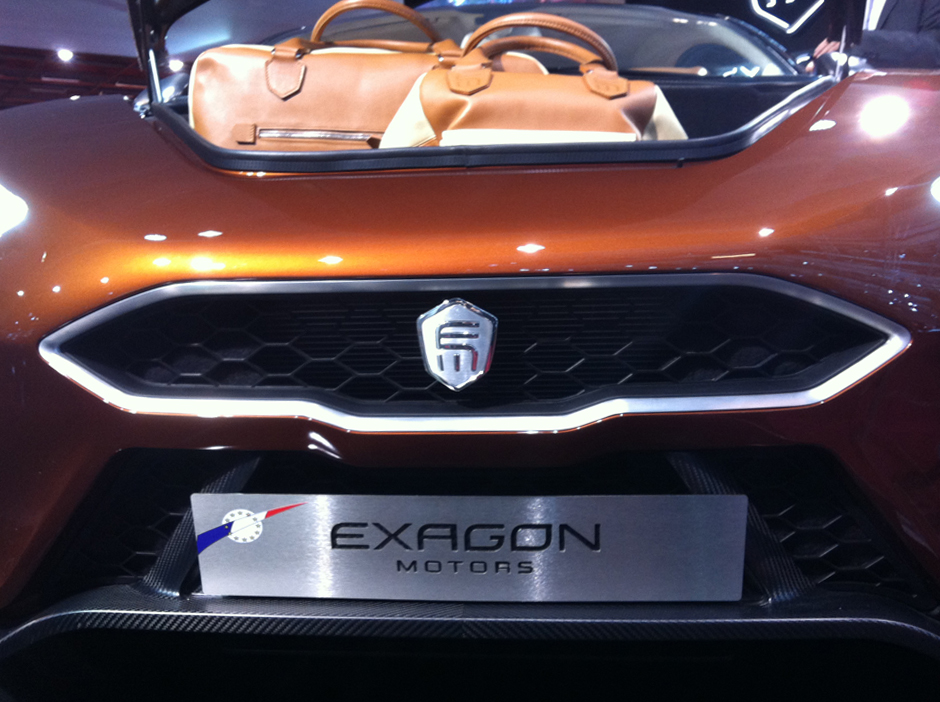 Next to McLaren was sitting the Exagon Stand. Exagon is a french company who chose to produce an electric car. But a very exclusive electric car : a GT. the result is interesting in term of technology, not really in term of design.  Proportion are good, but the design is very old fashioned for the exterior. (i.e the roof looks very…Zagato)

On the other hands, the interior looks very exclusive…very british.