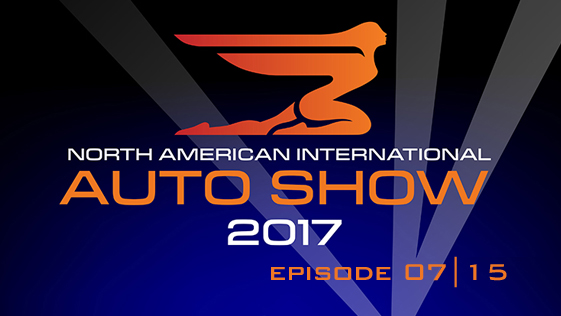 BMW announced the new 5 Series in Detroit. Very much an evolutionary design, but longer, wider, taller, and yet lighter than the outgoing model.
The 5 Series and the 7 Series are rather close in looks and may be hard for people to distinguish between the two. All engines are teamed with an 8-speed transmission. Notable on the interior is iDrive 6.0, featuring gesture control for some functions.

The larger 7 Series is shown for comparison.


The X2 concept was revealed at the show. It is a sporty looking companion for the X1 launched in 2016. The ‘angry’ looking front end has a large version of the classic grille – which has evolved considerably from the original twin kidney shapes. The ‘eyes’ are menacing and the grille is framed by large side air intakes connected by strong feature lines meeting below the main grille in the form of a splitter.

The hood and roof are long and low, while the greenhouse has narrow windows sitting over the prominent rear wheel flares. The sporty look is complemented by the long tailgate spoiler and the BMW roundel badge prominently placed in the C-Pillar – just like the brand coupes.