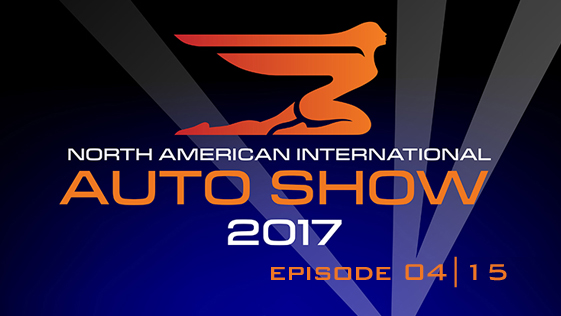 Fiat Chrysler (FCA) chose to reveal their Portal concept, a minivan for the future, at the Consumer Electronics Show in Las Vegas prior to the NAIAS. FCA is lagging the industry in the hybrid and electric vehicle area, although it now has the Pacifica hybrid minivan as well as the Fiat 500 all-electric available for sale. The hi-tech Portal is intended to burnish FCA’s image in the advanced propulsion and future-tech areas of the business.

The Portal is a semi-autonomous, battery electric vehicle with a 250-mile range. It features twin sliding doors on each side providing a 5-foot opening for easy entry and egress to the three-row reconfigurable seating. It was shown with two-handle yoke style steering and a glass roof with an interesting inner cruciform structure. The styling broke plenty of new ground and was full of interesting features and elements including the ball shaped rear view cameras. FCA hasn’t shown a concept at an auto show since 2009, but the Portal is clearly a success and worth the wait.

FCA introduced the new Jeep Compass at the show. It replaces both the old generation Compass and the Patriot. Neither will be missed, but they both sold well until the end in this SUV dominant market. FCA recently discontinued the Dodge Dart and the Chrysler 200. Both cars were decent, modern vehicles, but they have been swept away to make room for more profitable SUV’s and trucks. The new Compass follows the very successful Jeep formula — well packaged, very capable off-road, nicely equipped and with the look of a small Grand Cherokee.

On the separate Alfa Romeo stand, there were 6 Guilia’s and one of the new Stelvio SUV’s. Let’s hope that these long awaited cars make it to the dealer showrooms very soon. The question remains, however, can these good-looking cars make a lasting impact in the tough premium sedan market against the well-established brands like BMW, Mercedes and Audi.